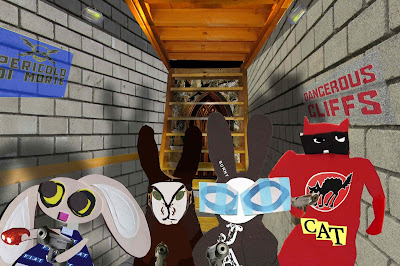 Deep under the bunker lay the tunnel and the Wabbit led the way. "Let's take this path," said the Wabbit. "I don't know what's at that end," warned Skratch the Cat. "There's only one way to find out," said the Wabbit and he hopped forward. Lapinette pointed her torch. "I think it's the house," she said. "The house it is then," murmured the Wabbit, "and let's be on the lookout for anything that smacks of geometry." "So we won't go off at a tangent," smirked Ledger. The Wabbit glanced at Ledger with astonishment and nudged Skratch. "I think I saw Ledger smile," he whispered. "A trick of the light," grinned Skratch. They hopped for quite a while, then Skratch glanced overhead. "I wonder where we are exactly?" "I'd say we're parallel with the edge of the woods," said the Wabbit. Skratch narrowed his eyes and shook his head. "They're surely expecting us," he sighed. "They're expecting something," said the Wabbit, "but now they're uncertain." "We're not even certain of who they are," said Lapinette. "It doesn't matter, because they will underestimate us,"  said the Wabbit. Sudden quiet fell and their shadows seemed to pace them as they travelled. "We appear weak, when we are strong." explained the Wabbit. "How strong are we?" asked Skratch. The Wabbit flicked imaginary dust from his fur. "We're all packing heat," he drawled.
at April 02, 2013