13, The Wabbit and the Alien Attraction 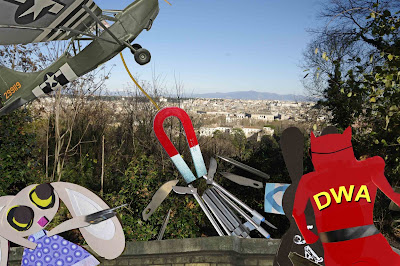 The engine drone became deafening as the plane flew overhead. The Wabbit clutched his fur as blades flew upwards towards a familiar object. "Why didn't I think of that?," muttered the Wabbit. "You can't think of everything," said Skratch, "you think too much as it is!" A clang rang out as a Sharpie stuck to a giant magnet. The Wabbit flinched back as a spike grazed his nose. "At least we know who it is!" said Lapinette. "Oh yes," muttered the Wabbit, who hadn't a clue. "This is Rio Bravo, Wabbit!" shouted Skratch. The Wabbit shrugged. "Because people you rejected are turning up to help," said Skratch." The Wabbit shook his head. "Wabbit, you're hopeless," grinned Lapinette. But as she gestured happily, the radio flew from her paw and joined the blades on their hapless journey to the giant magnet. "Grrr," said Lapinette. "Don't worry, Feathers" chortled the Wabbit. "I have another." The Wabbit shoved a paw in his fur for his spare radio - but Skratch clamped a paw down hard. "Leave it Wabbit. Let the Alien Pilot sort it out." "Alien Pilot!" shouted the "Wabbit. "I sent him far away." "Fortunately, not far enough," said Skratch.
at April 08, 2013