8. The Wabbit and the Secret Bunker 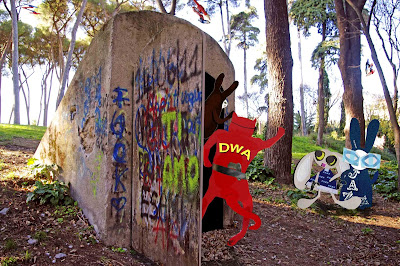 The Wabbit and Lapinette hopped rapidly under the trees to avoid the guided pencils raining from the sky, but still the Euclidean fighters circled. Deeper into the woods they spotted something odd. "What's that?" puffed the Wabbit. Lapinette stared. "It looks like a bunker," she said, "but I thought there were no bunkers left." "Maybe we can shelter there?" said the Wabbit - but as he hopped closer, a door creaked open. The Wabbit and Lapinette drew automatics from their fur and held their breath. "Surprise!" shouted a familiar voice. First Skratch's head, then Ledger's appeared from the doorway. "Better get inside!" yelled Skratch, "before they start progression bombing." Lapinette looked in the door. "Where on earth does this go?" "You're not going to believe me," said Skratch. "Let's talk inside," yelled the Wabbit as the increasing drone told him fighters were closing. Safe in the bunker's interior they listened as the fighters' drone grew inaudible. They sighed with relief and looked at each other. "I wasn't expecting this turn of events," said the Wabbit. "What were you expecting?" asked Skratch. "Just normal mild peril," said the Wabbit. Skratch smiled. "This leads to a tunnel," he said. "Where to?" "Where from, you mean," said Skratch. "Grrr," said the Wabbit. "From that garden you like," said Skratch, "You found it by trowel and error?" grinned the Wabbit.
at March 28, 2013