2. The Wabbit and the Mind of Railways 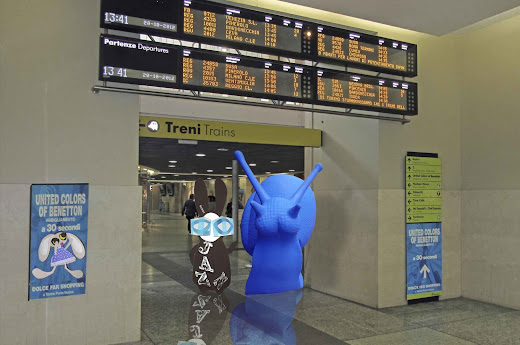 The Wabbit hopped through the Porta Nuova station. He thought of it as a short cut, but this was an illusion. Because of its many interesting features, it was always more of a long cut for the Wabbit. As he was pondering, he found himself hopping beside Big Blue Snail. "Perfect!" thought the Wabbit. Big Blue Snail was the most mindful creature he knew and he hoped it would rub off on him. "Hello Snail, how is your path?" he asked. "I am on it," said Snail. "So am I," thought  the Wabbit, but stayed silent. "This," said Snail, "is the railway station, and so I am both arriving and leaving." "When I pass through," said the Wabbit mindfully, "I am the station." There was no reply and the Wabbit paused. “Speak quick!" said Snail. The Wabbit shrugged and placed his paws over his mouth. "The train arriving at Platform Ten is leaving at Platform  One," he announced in an echoing voice. Snail smiled as passengers darted hither and thither. "Wabbit, there is no train at platform Ten." "Nor at Platform One," said the Wabbit. Snail turned to the Wabbit. "What is the mind of the railway?" The Wabbit  glanced up and his eyes twinkled. "The timetable," he said simply. Snail smiled. "Then what is the timetable for our next adventure?" The Wabbit gestured suddenly for Snail to follow. "I think it’s just started over there, at the Blue Exit ...”
at April 16, 2013