1. The Wabbit and Mindful Mindfulness 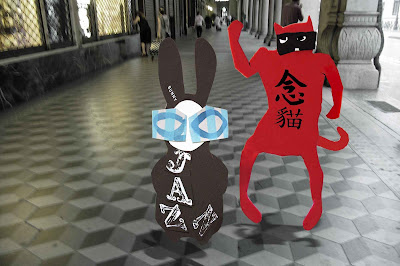 The Wabbit was hopping his favourite portico and deep in thought when he was abruptly interrupted. "Ho there, Wabbit!" called Skratch the Cat. Skratch was fresh from his mindfulness class and couldn't help spreading mindfulness around. "Mind your path," he intoned and lowered his head gravely. That action was mostly lost on the Wabbit, because he hadn't looked round. He knew very well that Skratch would catch up quickly and regale him with his latest learning. "I am hopping," said the Wabbit quietly. "Well, when you hop, you must hop," said Skratch, "and when I prowl, I must prowl." The Wabbit had never thought otherwise, but Lapinette had recommended the class, so he bore Skratch's enthusiasm with equanimity. "Where are you going?" asked Skratch.  The Wabbit' eyes twinkled. "It's only my path, and there is no coming or going," he said sagely, just to wind Skratch up. But Skratch nodded so seriously that the Wabbit pounced. "What must we be mindful of?" he asked suddenly. "The present!" said Skratch. The Wabbit grinned and softly enquired, "Where is the present?" Skratch looked hesitant and the Wabbit took his opportunity. "Here it is!" shouted the Wabbit and he hopped on Skratch's foot.
at April 15, 2013