1. The Wabbit and the City of Torino 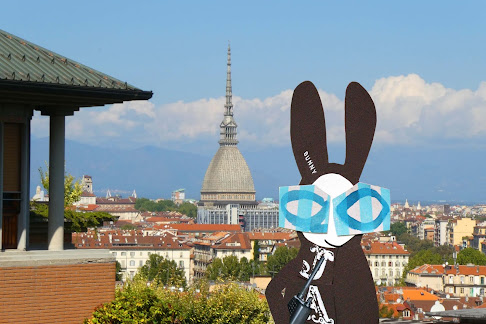 Here I am up on Monte dei Cappuccini. It's named for the order of monks, although I've never seen a monk up here, hooded or not. I just keep missing them. That's where the name comes from by the way - the hood is a cappuccio and gave its name to many things including the coffee. I'm between Adventures and I come up here for a bit of relaxation. It will almost certainly get interrupted because I expect a call any time from the Department of Wabbit Affairs. In the meantime I'm going to admire the view and tell you a bit about the place. Turin - or Torino - is a city of around 900,000 people and that's where I have my adventures. There's always plenty to do, believe me. Behind me is the Mole Antonelliana, which is the symbol of the city. Intended as a Jewish Temple, it's now a film museum. Many of my Adventures are set in and around it. That's where we met Moloch, who gave up his bad ways and became a member of our team. He's a key part of the plot of Cabiria, a silent movie made in 1914. It was made in Turin by the way and although the studios are long gone, we like to pay homage to that movie tradition. Oh, wait there's the radio crackling. It's probably another Adventure and so I must be on my way. Join me next week for another exciting story with Lovely Lapinette, Skratch, Wabsworth - and all the gang! Be seeing you then.
at March 12, 2021