4. The Wabbit and the Unexpected Guest 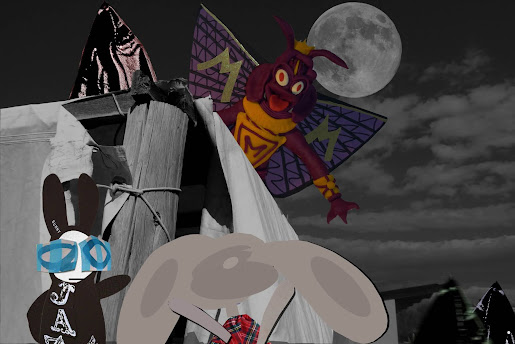 The Wabbit and Lapinette tracked the spectres to the sea. The ghouls seemed to have a destination in mind and they wanted to find out what it was. Moloch was an unexpected arrival. "Hello Commander, I was just taking a small vacation. Sea air and all that." His vast frame loomed over a rough canopy on the beach and makeshift though it was, the rough structure seemed to take his considerable weight. Lapinette spotted the ghoul at his back and tried to alert him. She waved her arms and jumped up and down. The Wabbit wasn't looking in the right direction and he gestured to the departing ghouls. "They went that way!" he insisted. Moloch was pleased to see his pals. "Are you having monster trouble?" he asked. "I can sort that out with a mighty sweep of my mighty arms." He swept his arms in both directions and the right hit the ghoul on the nose. "Whoops," said Moloch and turned. The ghoul growled and moaned and clutched his nose. "Is that him?" said Moloch, "what a poor excuse for a monster." He gave the ghoul a kick. It responded with a kick of its own. "You want trouble do you, pipsqueak?" said Moloch, "take that!" He picked it up and threw it along the beach, which had the unfortunate effect of alerting the other two. They turned and moved swiftly towards them screaming like banshee. "This wasn't in my plan," said Lapinette. "Nor mine," shrugged the Wabbit. "I think we should run," said Moloch. He vaulted the structure and grabbed them both. Then together they fled along the beach. "I think my original plan was better," puffed the Wabbit.