14. The Wabbit and the Big Think 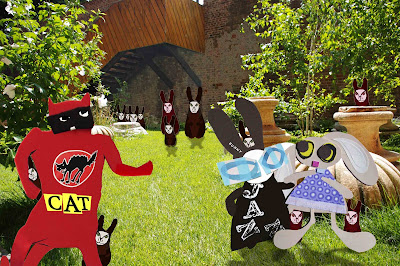 Skratch led everyone back through the Secret Tunnel and it did indeed emerge at the pretty garden that the Wabbit liked. "All's well that ends well!" said Skratch, gesturing back at Ledger and his wife and children. The Wabbit shook his head. "These recent adventures don't end," he said, "they just seem go on and on." "Just like life, Wabbit," said Lapinette. "One adventure ends and another starts." "But we still don't know why the Sharpies attacked us," said the Wabbit. "You're thinking again," said Skratch, "and too much thinking is a kind of curse." "It's called think-itis," said Lapinette. The Wabbit grinned and then thought about grinning so he stopped and made a straight face. "Don't you know the head gardener here?" asked Skratch. "I certainly do," said the Wabbit. "She's awfully nice and looks after my secret ..." The Wabbit realised everyone was listening intently and changed his mind. "Secret collection of pruning shears," he said finally. "Perhaps she could arrange for aperitivi to be served right here," said Lapinette. "All right," said the Wabbit. "Five aperitivi and some carrot juice for the children." "Some?" smiled Lapinette. The Wabbit made a quick calculation using both paws and narrowed eyes. "25 Litres," he smiled. "And picnic biscuits!" yelled Skratch.
at April 09, 2013