9. Wabsworth & the Genie in the Bottle 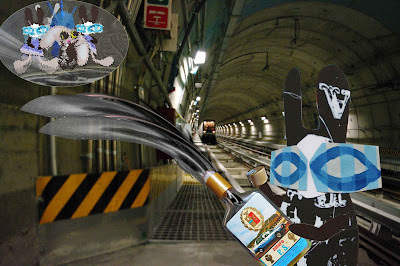 Suddenly the music stopped and everything froze - everything except for Wabsworth and the Dark Energy creature. Wabsworth pulled the bottle from the coat that the Wabbit had given him - and with a quick twist of his paw, he opened the cap. The distinctive smell of amaro was strong enough to fill the tunnel and Wabsworth wondered how the Wabbit had come by the bottle. "Some Gala Dinner that must have been!" he thought, looking at the police label. There was no mistaking the creature's joy. It only had eyes for the bottle and it compressed until it could squeeze through the top. The creature squeezed and squeezed until it was completely inside. And through the glass, Wabsworth could see singularities swirl around until everything was darkly dense. "It's drinking the dregs!" thought Wabsworth and he deftly rescrewed the cap. Wabsworth wasn't sure what would happen, but he reasoned that amaro was digestive and medicinal. "Black holes can only benefit," he thought and he looked round to see Ghost Bunny spooking into her former ghostliness. Lapinette and the Wabbit formally returned heads and Big Blue Snail slid backwards and forwards  on the rails in a kind of break dance. "You don't see that every day," thought Wabsworth.
at April 26, 2013