6. The Wabbit and the Disappearing Ship. 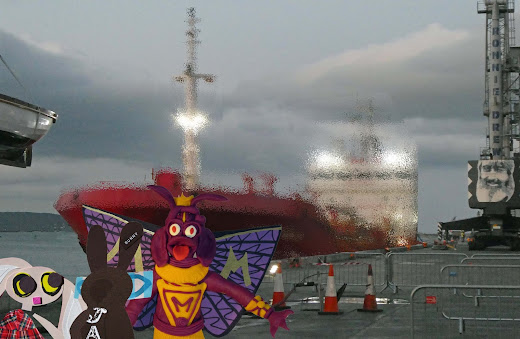 The sea phantoms had vanished, but the ship began to disappear too. It shimmered as it broke into crystals, then faded to nothing. It was as if it had never been there. Only an empty berth remained. Moloch turned and spread his arms. "They've gone." He seemed disappointed. "We fight another day, shrugged the Wabbit. "But they said they'd be back," said Lapinette. "I'll be ready for them," said Moloch. Lapinette considered for a moment. "How do we know they're on the ship?" The Wabbit knew the answer. "It's how they travel. Any ship will do. They just take it over." Lapinette sniffed. A faint smell from the bottom of the sea lingered on. They began to walk back along the berth, but turned as the invisible ship gave a prolonged blast on its foghorn. The Wabbit nodded gravely and waited for the next. After two minutes it sounded again and the Wabbit said, "They're telling us they're making way." Lapinette shuddered. Moloch loped along. He was quiet for a monster. "What are they for?" he said. "For?" echoed the Wabbit. "What is their purpose?" said Moloch. Lapinette paced silently behind Moloch. "I think they're harbingers of doom." "So I guess we'd better keep on bewaring," said the Wabbit. "Like the man in the bookshop said," whispered Lapinette. The Wabbit gave it consideration. "Perhaps we weren't supposed to beware of the sea phantoms, more what they portend." It was all too much for Moloch. "I don't beware much, as a rule," he chortled. Lapinette poked him in the back and he jumped in the air. "Beware of alphabet grenades," she quipped. "Why?" said Moloch. "They could spell disaster," giggled Lapinette.