The Wabbit & the after Adventure Picnic 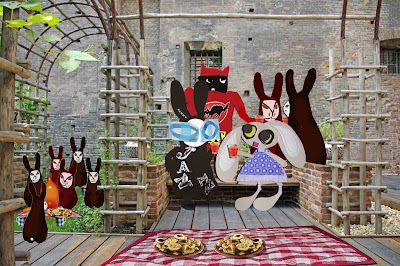 They all gathered and drank aperitivi and talked about what a strange adventure it had been. There had been so many enemies and unexpected happenings that they were quite bemused. Still, the Wabbit did think about asking Skratch the Cat what type of adventure it was, but there was little point. Skratch had already said it was like the movie, Rio Bravo. "There were rather a lot of guns in our adventure," said Lapinette. "Yes and they weren't much use, were they?" sighed the Wabbit, "they weigh down my fur a lot and require maintenance." "In future Wabbit, we need to use our wits more than weapons," said Skratch. The Wabbit thought for a bit, sipped his aperitivo and listened to the children. "Skratch," interrupted Lapinette, "what resolved the story in Rio Bravo?" "Explosives," said Skratch, with a matter of fact purr. "Remind me of what happened," said Lapinette brightly and considered another aperitivo. Skratch smiled a very broad smile indeed. "The heroes threw the dynamite at their enemies and set it off with gunfire." "The Wabbit sighed a long sigh. "Then I suppose it just depends," he said. "Depends on what?" asked Lapinette. "What I happen to have in my fur," smiled the Wabbit.
at April 10, 2013