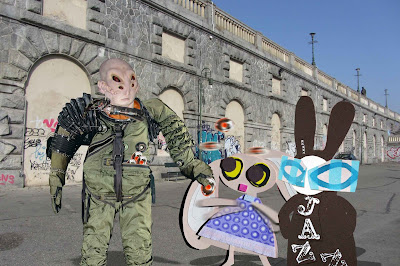 Very, very early in the morning, on the path by the River, the Wabbit and Lovely Lapinette met with the Alien Pilot. It was unfinished business, because the Pilot had said he would pay their price for obtaining the Sharpies - and their metal. The Wabbit wanted to leave the whole thing be. But Lapinette thought that was discourteous. "The Alien Pilot rescued us, make no bones about it," she had said in a special voice and the Wabbit knew better than to argue. Her words rang in his ears when the Pilot spoke. "You did me a favour Wabbit." The Wabbit inclined his head. "I heard about metal commodities in a bar on the Planet Lythion and decided to try my luck." The Wabbit tilted his head even further and narrowed his eyes. "Then call it 50 Quid and we're square," he murmured. "It's too little," said the Pilot, dropping high denomination coins into Lapinette's paw. Lapinette span them in the air and caught them with her other paw. "Pilot," said the Wabbit finally, "you did us a favour, your money's no good here." "Business is business," said the Pilot. The Wabbit paused. "Then call it our investment in your future business," he said. The Pilot raised all of his eyes. "In which we'll take considerable interest," smiled Lapinette innocently.
Quid: Quasi Universal Intergalactic Denomination
at April 11, 2013