3. The Wabbit and the Sea Phantoms 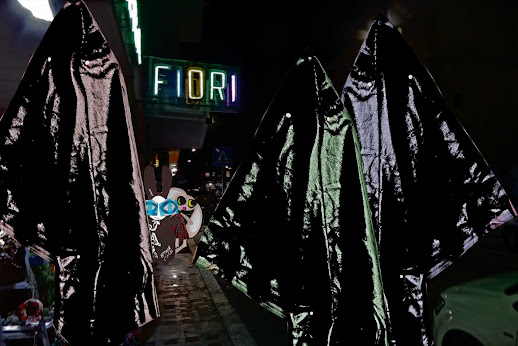 All the streetlights failed at the same time. What little light there was came from nearby shops and they were going out too. The Wabbit and Lapinette looked with horror as three spectres cut a dark passage along the street. Each time they passed a shop, lights dimmed and failed entirely. The Wabbit put an arm in front of Lapinette. "Don't go near them." Lapinette sniffed. "Yuk. They smell of bad sea." The Wabbit grimaced at the odour of seaweed and long dead things from the bottom of the ocean. "They're sea phantoms, I've met them before." Lapinette turned. "With Jenny. You told me." The Wabbit sniffed. "They're probably the things we have to beware of." He didn't like his sentence construction. Lapinette smiled and corrected him. "Of which we have to beware." The Wabbit let it go. "At the minute it's three ghouls to two." He chortled at his bad joke. "Well maybe we can even it up," said Lapinette, "What did you do the last time?" "Sulphur soap and a bell," said the Wabbit. "Sounds like Jenny," replied Lapinette, "Old school." The Wabbit twitched an ear. "What does new school say?" Lapinette spoke calmly. "Derrida says they are daemons from our own past." The Wabbit wasn't impressed. "Well. They are." Lapinette crept after the phantoms. "We won't fool them twice with the same trick." The phantoms wheeled and made their way onto Via Gregorio VII. Lapinette was still talking. "We have to figure what overall structure they're part of." The Wabbit struck. "Of which structure they're part?" Lapinette stood on the Wabbit's foot and he couldn't help giving a yelp before they ducked out of sight. A phantom turned and looked around. He shouted with a voice from the very bottom of the ocean. "Who goes there?" "Mice?" whispered the Wabbit.