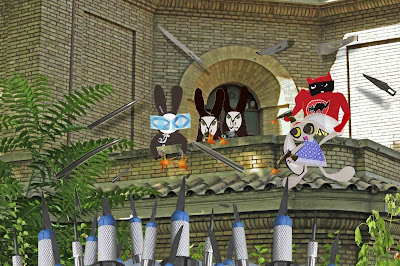 The Wabbit led the rush to the balcony and they all scrambled up. But the Sharpies were fast and hurled blade after blade. Automatics were hardly a match for the missiles, but for a while their fire held the enemy at bay. "What next Wabbit?" shouted Lapinette. "Aim for the blades," he yelled. "Kill the blades and you kill the ghouls." "That's the wrong film, Wabbit," shouted Skratch. "This is Rio Bravo, not the Night of the Living Dead!" "We'll be the living dead in a minute!" scowled Lapinette as a blade shattered close to her foot. Blades rained down and some wedged quivering in the brickwork. "We need reinforcements," muttered Skratch as he dragged Lapinette onto the balcony. "I'd radio in if I had a spare paw," said the Wabbit, dispatching two Sharpies with two shots. Suddenly the Sharpies stopped. Sounds of fighting died away and there was silence. The Wabbit shook his head and slid fresh clips into his guns. "The radio, Wabbit!" whispered Lapinette. "Oh yes," said the Wabbit and he fished in his fur. He fished for a long time, glancing up from time to time and smiling with a lopsided grin. Finally he found what he was looking for and looked directly at Lapinette with a straight face. "Did you remember to charge the batteries?" he smiled.
at April 04, 2013