8. The Wabbit and the Science of Soul 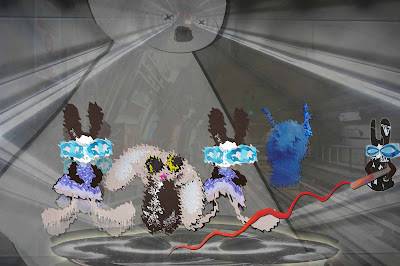 Ghost Bunny haunted into action. The Wabbit had accidentally touched the Dark Energy creature so there was nothing else to do. She became enormous and piercing light shot from her eyes. "Wabsworth! Now!" she shrieked. Wabsworth fired the anti-matter decelerator and everything whirled, shattered and reassembled in a startling scene. The creature became flat and Ghost Bunny began to sing. "Callin' out around the world, are you ready for a brand new wail?" The Wabbit sang back. "Summer's here and the time is right, for dancing on the rails." "Dancin' in the Metro," sang the two Lapinettes. "Slidin' on the rails," sang Snail in the background. Wabsworth couldn't help grinning. "What did you do?" "I'm protecting them with music," wailed Ghost Bunny, "do you have a bottle for the creature?" "Yes, in my fur," said Wabsworth. "When the music stops, everything will change," said Ghost Bunny. "The creature will shrink, and you can trap it in the bottle." Lapinette and the Wabbit swayed sinuously. "All we need is music, sweet music," sang the Wabbit, "there'll be music everywhere." "There'll be swingin' swayin', and records playin'" sang Lapinette, "dancin' on the rails!" Wabsworth rummaged in his fur. "Oh, shall we let them finish?" smiled Ghost Bunny, sweetly.
at April 25, 2013