The Wabbit hears News of a Friend 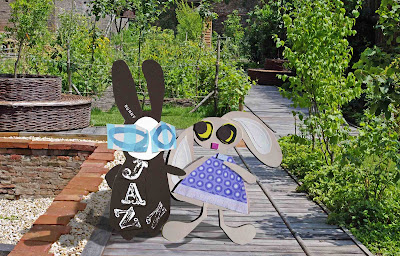 The Wabbit and Lapinette hopped to a Safe Garden nearby and the Wabbit touched Lapinette's paw. "What up?" he asked with a half smile. "This is on the strict QT," said Lapinette, "It's not official Department business." "The Wabbit nodded but stayed quiet. "It's our friend, Cardinal Lapin," frowned Lapinette. "He's due for a promotion." "Oh," said the Wabbit, "a Chief Cardinal already?" Lapinette made a funny face at the Wabbit and continued. "Threats have been made against him and now he's gone missing." The Wabbit's demeanor changed. He growled the deepest of growls and his paw grasped for some object in his fur. Lapinette's ears twitched as she heard an unmistakable metal click. "I'll hop straight off then," said the Wabbit. "Things to do, cardinals to find." Lapinette sighed. "It's not official, we're not supposed to know." "Never heard a thing," said the Wabbit. "Anyway, I do have leave outstanding." "When do you propose to take it?" asked Lapinette, although she knew the answer. "Immediately immediate," said the Wabbit and he turned to go. "Wabbit!" called Lapinette. The Wabbit turned and looked at Lapinette with the other half of his smile. "Mind your back, Commander," she said in a  low voice. The Wabbit grinned. "I've been minding my back so long, I forgot I had a front."
at April 30, 2013