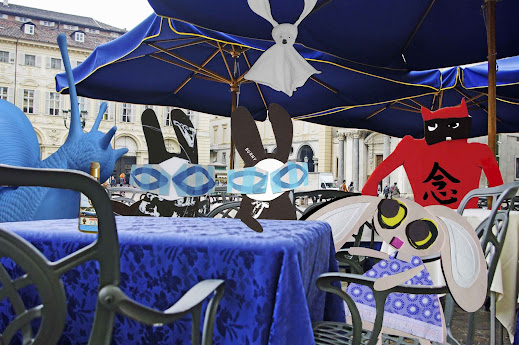 After the adventure they all gathered in a caffè for a quick discussion. "Oh, there you are Skratch, smiled the Wabbit. "I’ll ask The Question." "No need," said Skratch, "It was a Crazy Cool adventure and none the worse for that!" The Wabbit looked relieved. "It belonged in no particular genre then?" asked Wabsworth. Skratch nodded with approval, but Lapinette was impatient to know what to do with the dark energy creature. "Ghost Bunny, do you know of any galaxies short of a few singularities?" she enquired. "Well, this one here," said Ghost Bunny. Lapinette wrinkled her nose. "OK," said Ghost Bunny, mimicking the Wabbit. "Galaxy M85 is sadly lacking." "Just the ticket," said the Wabbit. "I’ll get Quantum the Time Travelling Train on the job right away." "Can I go along for the ride?" asked Snail. "I don’t get to many galaxies." "Bring back pictures," grinned the Wabbit. "Is it far?" said Snail. "Sixty million light years," said Ghost Bunny. "Then let the Train take the strain," nodded Snail. Everyone laughed and broke into conversation - except for Lapinette and the Wabbit. "Wabbit, something urgent has come up," whispered  Lapinette. The Wabbit crinkled his eyes and took her paw. "Let’s go for a hop and you can tell me all about it," he said. So they quietly disengaged from the merry band and hopped round the corner for a chat.
at April 29, 2013