12. The Wabbit and the Scrap Metal Trade 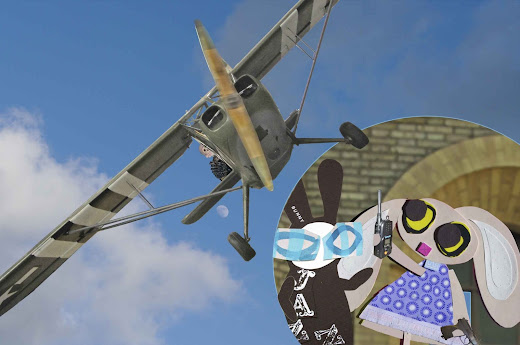 Lapinette grabbed the radio from the Wabbit and hit it once. For a few seconds nothing happened. Then the radio crackled and burst into life. They could hear the sound of a plane and a voice sang, "Any old iron, any old iron, any any any old iron." The Wabbit started to tap a foot but Lapinette stepped on it sharply and glared at him. "Single engine light plane, 1930s," said the Wabbit. "Not one of ours?" asked Lapinette. "Definitely not," said the Wabbit. Lapinette lifted the radio. "To whom am I speaking," she enquired. The singing stopped and the engine drone dropped. "Just an old space trader," said a voice. Lapinette paused and considered.  “Don’t I know you from somewhere?" she asked. "It’s a small galaxy," said the voice. "“But you need some assistance and I’m here to take any old scrap metal off your paws." Lapinette looked at the Wabbit and raised an eye. The Wabbit shrugged. Lapinette lifted the radio again. "We do have some merchandise," she breathed softly. The Wabbit jumped up and down and waved both paws upwards. "For a price," hissed Lapinette. "I buy any scrap," hummed the voice. "with your price paid." Lapinette looked at the Sharpies’ blades and smiled. "You take charge of the merchandise and we’ll agree a price later." "On my way," said the voice. "And if you have anything metal in your fur ..." The Wabbit patted his fur frantically. "... please anchor it down." said the voice.
at April 06, 2013