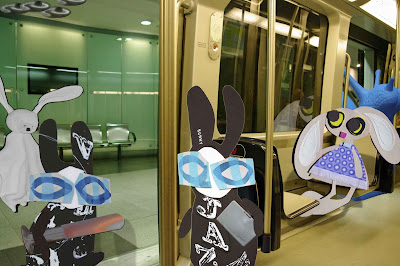 Ghost Bunny was as good as her word and the Wabbit's android double, Wabsworth appeared bearing a strange device. "What's that weird thing, Wabsworth?" asked the Wabbit. "It's an anti matter decelerator I knocked up in the shed," said Wabsworth. "Now let's get this creature who didn't pay his fare - and blow him to kingdom come." "I like your style Wabsworth," said the Wabbit, nodding his head. "Oh, hurry up Wabsworth, before the doors close, the Metro is automatic," said Lapinette. "Then we 'll spot the creature in the tunnel and hop out." said the Wabbit. "How will we get the train to stop?" asked Snail. In his efforts to squeeze through the door, Snail had temporarily prevented them from closing. "I think I'll leave that to the Wabbit," said Lapinette. The Wabbit grinned and pulled from his fur a set of tools he had picked up cheaply in a market. "Spanners for throwing in the works," said the Wabbit. "Why don't we just pull the communication cord," commented Snail. "And risk a fine!" said Wabsworth in a shocked voice. Ghost Bunny let out a quavering wail. "All aboard, all aboard the Dark Energy Express." The doors closed with a hiss. With hardly a jerk, the train moved down the platform and into the tunnel.
at April 22, 2013