5. The Wabbit and the Delayed Boarding 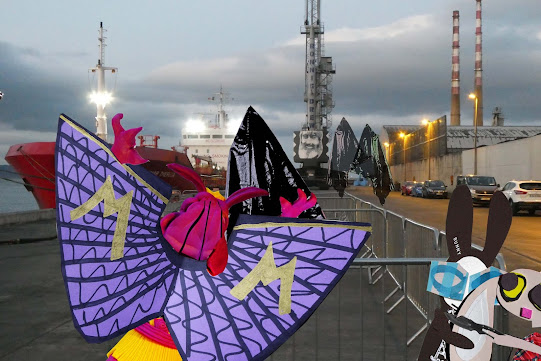 The chase lasted until dusk. They ducked and dived until at last the team found themselves behind their adversaries. They were in the docks. The m/v Dagmar bobbed on the water as it waited for high tide. The ghouls had chosen wisely. No one would look for them on such a vessel. Moloch was spoiling for a fight and the Wabbit couldn't stop him. Before the ghouls boarded, he let out a cry and jumped at them. "You think you can scare me, ghoul? I am Moloch, you insubstantial fiend. I'll cut out your liver and eat it on toast." The head ghoul stood his ground and sneered "I have no liver, monster. Just the ill cut weeds of a thousand leagues, bitter to the taste." Lapinette drew her edged weapon. I'm going to cut out whatever he's got." The Wabbit held her back. "Leave Moloch to do his thing." Moloch's claws were sharp as a fistful of box cutters. With his first swipe he shredded the head of the ghoul, but the head merely re-assembled. His second swipe cut it in half - with much the same result, except for a rank smell of seaweed. But the ghoul was in difficulty and stepped back to join his fellow spectres. "You think you've won, Moloch? Far from it." All three gradually faded from sight until there was nothing left but smell. "Where have they gone," shrieked Moloch. The air whispered on the dockside like lingering body odour and a voice hissed." "We'll be back!" Lapinette swung her edged weapon at nothing much. "Did they board the ship?" They were uncertain but the Wabbit couldn't resist a quip. "They bought tickets to the Dead Sea."
at March 22, 2021