3 The Wabbit and the Dark Presence 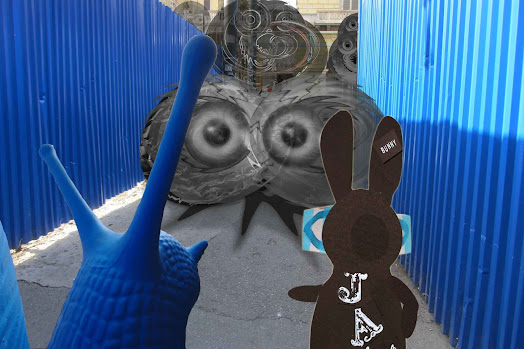 Big Blue Snail and the Wabbit hurried to the Blue Exit and there in their path was a presence.  A swirling black cloud was making its way slowly but steadily through the temporary entrance to the Porta Nuova Station. The Wabbit held out a paw to stop Snail’s advance and Snail slithered to a halt. "What is that thing, Wabbit?" asked Snail. "Just stand still," said the Wabbit, "Stand very, very still." The presence slowly advanced and moved straight through them as if they weren’t there. "I thought so,” said the Wabbit. "Thought what?" asked Snail. "A Dark Energy Creature," said the Wabbit. "Is that proved?" said Snail, who was a sceptic when it came to theoretical physics. The Wabbit shivered.  "It is now," he said. "Snail, how did you feel?" "I felt nothing at all," said Snail. "It ruffled my fur," said the Wabbit. They watched as the presence moved slowly onwards. "Where is it going?" asked Snail. "Where would you go if you were dark energy?" replied the Wabbit. Snail thought for a minute. "The Metro?" He tried to shrug like the Wabbit, half succeeded and then asked, "Who knows most about dark energy?" "Lapinette," said the Wabbit. Snail considered. "I don't like the look of 'em, we need more help." "Ghost Bunny," said the Wabbit immediately. "Better get on your radio," said Snail. "To call Ghost Bunny," smiled the Wabbit, "I need no radio." And he twitched his special blue glasses in a most special way.