7. The Wabbit gets Too Close 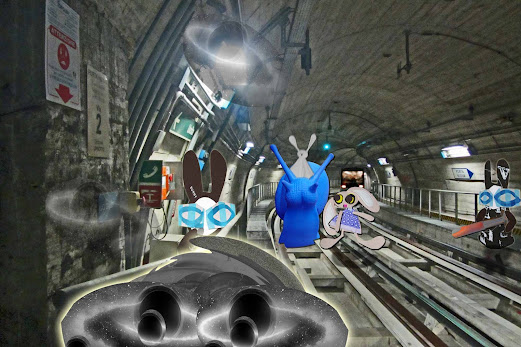 As the train passed the Dark Energy creature, the gang jumped out and ran back in pursuit. Snail glided along on the rails in a perfectly satisfactory fashion, while Wabsworth took up position on the access hopway and drew a bead on the creature. Right at the front, the Wabbit crept up behind the creature and studied it with interest. It took not the slightest notice of the Wabbit, but its eyes continued to spit out small black holes, which spiralled up in search of food. The Wabbit saw several tools and a few coils of wire disappear into the holes. So he clutched his own toolkit tightly and called out, "What next Ghost Bunny? Shall we use the decelerator?" Wabsworth lifted it and shouted across, "Ready when you are!" "Not yet Wabbits," wailed Ghost Bunny, "we require a clear space." She made herself hauntingly comfortable on Snail’s head and looked around. Lapinette looked too. "We need somewhere to put it," she yelled to the Wabbit. "Like a box or something?" he answered. "It will be enormously dense," moaned Ghost Bunny. "You did say they were stupid," agreed the Wabbit. "What about a bottle?” shouted Wabsworth. "Oh, put the genie in a bottle?" murmured the Wabbit. "I have just the thing." The Wabbit rummaged in his fur for something suitable, but he was getting closer and closer to the creature. "Don’t touch it!" shrieked Ghost Bunny. "Aaaargh!" yelled the Wabbit.
at April 23, 2013