4.The Wabbit & the Nature of Dark Energy 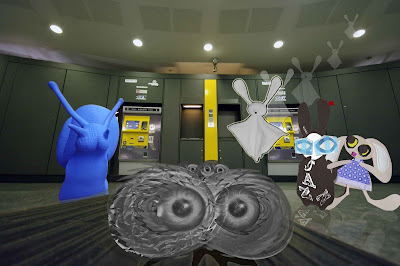 Ghost Bunny appeared swiftly in her usual haunting manner and Lapinette wasn't long in arriving. Together they watched the creature make its way into the Metro. "What's all this, Wabbit?" snapped Ghost Bunny. "I was watching television." The Wabbit gestured towards the Dark Energy creature. "Oh, these plonkers!" said Ghost Bunny. The Wabbit knew that Ghost Bunny was attached to old British sitcoms and had picked up the language. "It could be dangerous," said Lapinette. "Oh it's very dangerous." Ghost Bunny uttered a haunting wail. "But they're hopelessly stupid." Lapinette sighed. "Oh I hate the stupid ones." "They accelerate the universe," said Ghost Bunny, "but they don't know why." "Neither do we," said the Wabbit, "and it's going to the tunnels." "To feed," said Ghost Bunny, "and it's all your fault." "The Wabbit looked quizzical. "You suggested that the stations on the Metro were edible." The Wabbit looked nonplussed. "You indicated you get on at Pizza and get off at Macaroni." Lapinette buried her head in her paws and Ghost Bunny fluttered around. "They're quite voracious. The universe will become unstable." "How did it get here?" asked Snail. Ghost Bunny shrugged just like the Wabbit "Probably hitched a lift on that asteroid you allowed to hang above the Corso Svizzera. "I got a parking ticket for that," scowled the Wabbit.
at April 18, 2013