5. The Wabbit and Singularity Trouble 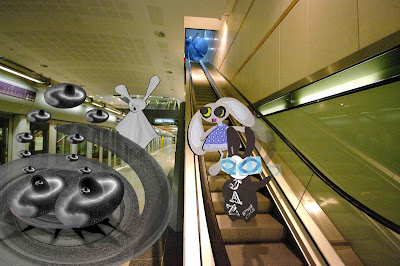 Big Blue Snail made for the lift while the rest scampered down the metro escalator in pursuit of the Dark Energy Creature. But just before they reached the bottom, the creature suddenly transformed and threw spirals from its baleful eyes. "Ghost Bunny, what’s it doing?" yelled Lovely Lapinette.  "Preparing to feed," wailed Ghost Bunny in a cry that echoed hauntingly from the station walls. The Wabbit’s ears quivered. "With its eyes?" he gasped. "They are not eyes," howled Ghost Bunny. "Think of them as mouths." "They’re singularities!" shouted Lapinette. "Best not to get in its way then," said the Wabbit and he felt in his fur for his automatic. "Wabbit, you can’t shoot a black hole with a gun," hissed Lapinette. "Oh," said the Wabbit in a disappointed tone and he rummaged around for something more appropriate. "Do you have an anti-matter decelerator?" asked Lapinette sarcastically. "It’s in my other coat," quipped the Wabbit. "Wabsworth has your other coat," smiled Lapinette. Ghost Bunny let out a shriek. "Wabbit, I'll summon your android double. That Wabsworth's going to be furious." Lapinette raised her eyes. Ghost Bunny and the Wabbit spoke at one and the same time. "The creature failed to buy a ticket."
at April 19, 2013