Lovely Lapinette and the Secret Service 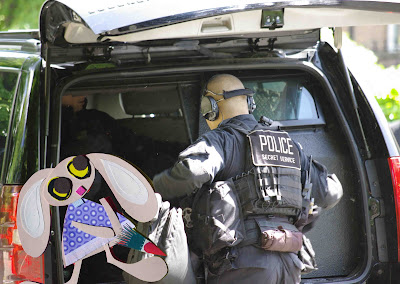 Lapinette and the Wabbit paused for a minute. The Wabbit knew Lapinette would get to the all important make-up case so he sipped his aperitivo and settled back to hear the rest of the story. "My security detail was duly assigned and he was a very tall man, handsome and strong. He sat me in his truck and took the piece of gravel out of my paw with a special piece of equipment." "He did, did he?" The Wabbit was paying special attention. "Yes, he did," said Lapinette. "Then he said he would like to give me something. So he reached in his own luggage and took out the make-up case." "Just like that," said the Wabbit. "Just like that," said Lapinette. "He told me he had it specially made for his girlfriend and that she had dumped him, so he would like me to have it." "That must have been a surprise," said the Wabbit. "It certainly was," said Lapinette, "and so I told him what a silly young woman that must have been and that he could do much, much better." The Wabbit buried his face in his paws for a second. Lapinette ignored him and continued. "Then I popped the make-up case in my bag and that is where it stays." "Might come in handy," said the Wabbit. "And I have his cell phone number," added Lapinette. "So might that," said the Wabbit. Lapinette's story was over, their aperitivi were both finished and so the Wabbit called for the bill. To his surprise the waiter came immediately. "Things are looking up," thought the Wabbit.
at May 31, 2011