Lovely Lapinette gets an Important Lift 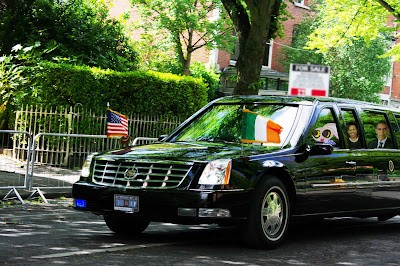 As Lapinette went on with her story, the Wabbit could barely contain himself. "Inside the car, there was a most important couple, the President and his Lady." Lapinette paused for effect and to see if the Wabbit was listening properly. The Wabbit drew in a breath and asked "What were they like?" "They were very courteous and asked me about many things," said Lapinette. "Did you ask about wabbit exclusion? Did you? Did you?" The Wabbit nearly fell off his seat with excitement. "Yes of course," said Lapinette. "They are both very well-versed in matters of civil rights. I was told that the matter would be given due priority." The Wabbit looked down at the cafe table and and thought of his own ever-growing list of unclassifiable tasks. Then he looked back up again. "Are you listening, Wabbit?" Lapinette flicked her ears around. "Yes, yes, you mentioned due priority," said the Wabbit. Lapinette continued. "He told me he was not just a president for people but for animals too." The Wabbit smiled broadly and warmly. "What happened then?" "Well, they said that they couldn't take me all the way so they insisted on dropping me off with a special security detail to see me to my destination." Lapinette seemed to be getting to the end of her story so the Wabbit threw in a quick reminder. "And the make-up case, remember?" "Patience is a virtue," said Lapinette.
at May 30, 2011