The Wabbit meets Lapinette for Lunch 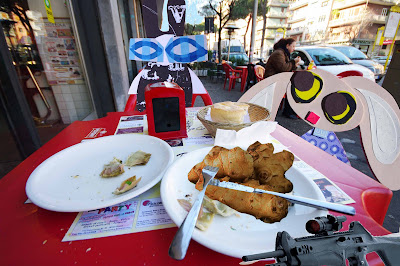 Lovely Lapinette was contemplating a plate of artichoke tubers when she felt the Wabbit staring at her. "Whats that?" The Wabbit nodded to the corner of the table. "My make-up case," said Lapinette in a manner that indicated it could hardly be anything else. The Wabbit knew better than to say that it didn't look like a make-up case. "Why don't you order a couple of carrot-based aperitivi and I'll tell you how it came to be in my possession," said Lapinette. The Wabbit effected disinterest and tried to attract the attention of the waiter. He wiggled his ears and wriggled his nose and he even tried clicking his paws. All to no avail whatsoever. Lapinette feigned impatience and then made her left ear tremble imperceptibly. "Due aperitivi di carote fresche for the Marchesa and her companion. Subito!" The waiter had appeared like lightning and was gone just as quickly. The Wabbit bristled. But he tried hard not to take offence since drinks speedily arrived with two small plates of carrot flakes. The pair were contemplative as they sipped their drinks and nibbled their carrot flakes. The Wabbit could wait no longer. "You were going to tell me how you came to acquire such a make-up case," he said. "You won't believe it," said Lapinette. "I will, I will, I will," said the Wabbit with urgency. Now the Wabbit was desperate to hear the story. "Once upon a time, in a distant land," began Lapinette. "Ooooh," said the Wabbit.
at May 28, 2011