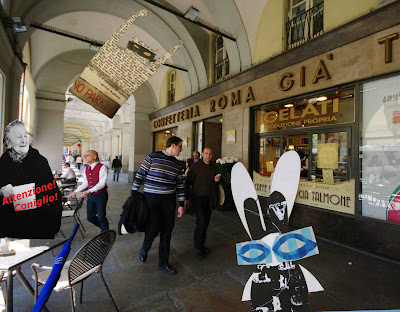 The Wabbit hopped back by a different route. He liked Torino's 18 kilometers of porticos and, if it rained, they kept his fur dry as he hopped. The truth to tell, he liked to go past Roma Gia' Talmone (or Talmone's place as he called it) and smell the ice cream. But now that the Wabbit had been alerted by the old lady's letter, he did feel a little uncomfortable. He knew that he was being followed and he tried to be extra alert. But it just made him hungry and so he found himself glancing at the Talmone's customers with envy. That was when he spotted the old lady with the umbrella. "Ah, there you are," said the Wabbit with relief. "I need to speak with you." The old lady put a finger to her lips and gestured to the portico ceiling. The Wabbit looked up. To his horror, he saw someone that he had taken the utmost care to avoid for some time. "Skratch the Cat Burglar, I thought you were still inside," breathed the Wabbit. And as he was thinking that thought, the old lady seized her umbrella and poked it high in the air to dislodge the Wabbit's adversary. "Take that for your trouble," she cried, poking Skratch fiercely. "And that. And that!" Skratch pulled himself further into the portico ceiling with ease. Then, with astonishing speed, he made off in the direction of a self-service restaurant called Brek, where there were rich pickings for a cat of his not inconsiderable talents. The Wabbit watched as the elderly lady sped after Skratch the Cat Burglar. For some time he could see a blue umbrella swinging above the crowds of strollers and he watched until her urgent cries of al ladro! were replaced by the shrill sirens of the Carabinieri. And then the Wabbit went home.
at May 19, 2011