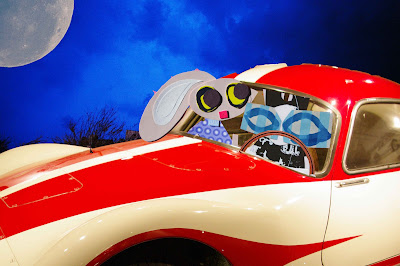 After the Wabbit and Lapinette had enjoyed a fine meal, the Wabbit was on the way to Frankfurt Airport when Lapinette said suddenly, "Why don't you just keep going and give me a lift home?" The Wabbit thought, quite erroneously, that Torino was most awfully far and said, "Turbina is very thirsty on fuel." Lapinette rummaged deeply in her bag, brought out a concertina wallet of plastic cards and pretended to play it, whilst humming a pleasant tune. The Wabbit opened the throttle. Turbina lurched forward and, for a moment, flames spat from her jet exhaust. "Oh no," said the Wabbit. "We'll probably get arrested." Lapinette smiled. She searched more deeply in her bag and brought out a diplomatic passport - with which she proceeded to fan herself. The Wabbit nodded and his ears brushed along the roof of the car. Turbina took the next slip road on the Autobahn and headed South. Then the Wabbit's stomach rumbled without warning. It was a long, low and somewhat threatening rumble and the Wabbit looked dismayed. Lapinette searched briefly in her bag and produced a salad sandwich. "It's 500 kilometers to Torino," she said - and handed the salad sandwich to the Wabbit. The Wabbit shifted into a more comfortable driving position and adopted a theatrical tone. "We have a full tank of gas, a salad sandwich, it's dark and I'm wearing funny glasses." "Hit it," breathed Turbina. And instantly they were a mere pin prick of light in the distance.
at May 10, 2011