The Wabbit gets orders from the General 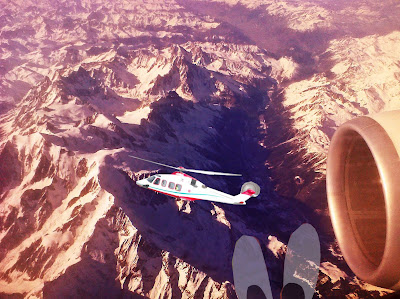 The Wabbit was staring out the window, convinced that he could see a familiar helichopper, when the Captain's voice boomed over the tannoy. "Mr Wabbit! Incoming communication for you from La Generale Lapinette. I'll patch it through." The Wabbit's eyes shot up as far as they could possibly go. A steward handed the Wabbit a headset and, not without a little difficulty, he put the headphones on his ears. "Em, you were promoted, Lapinette?" "Because I'm worth it!" Lapinette laughed her infectious laugh and continued. "Your mission has been changed. Orders from on high." "Higher than you?" The Wabbit asked this in tone of voice that he thought was humorous. Lapinette ignored the Wabbit's misplaced wit. "It is an extremely important wabbit matter. You are diverted to Frankfurt, where you will proceed on a mission of the utmost importance." "Is it Importantly Important?" The Wabbit thought everything was considered important these days and liked to make sure of the relative importance of everything. "It is most urgently important." said Lapinette. The Wabbit noticed that the steward had placed a bulky envelope marked Mission Papers behind the net on the back of the seat in front. "Copy that Generale," said the Wabbit, getting his terms right for once. "Buon viaggio, bello. Out," said Lapinette without further ado and the Wabbit saw the helichopper fade into the distance.
at May 02, 2011