The Wabbit makes his Appeal Speech for Kaninchenrettung 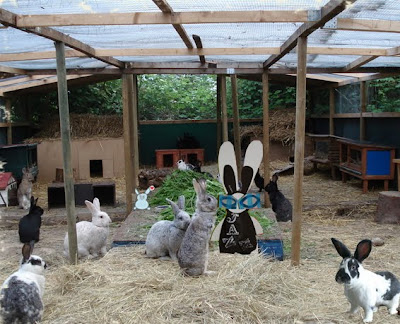 When the Wabbit reached the Kaninchenrettung compound he was most impressed. Some wabbits gathered round and murmured "It's Herr Kaninchen, the Wabbit." Others seemed to know him only as the Jazz Wabbit. There was polite applause for a considerable time. The Wabbit waited for it to subside and then began with a question. "Fellow wabbits! What are your just and fair requirements?" A young wabbit at the rear binkied high in the air and cried "Homes, carrots, health care!" Another said, "We urgently need vet's funds. Through no fault of our own our bills are prodigious." The Wabbit nodded in sympathy and continued. "Wabbits have made considerable gains in recent times." He paused again as sounds of agreement echoed round the compound. The Wabbit went on. "Still, we remain in the shade of other mammals. And so we must find allies as did the Free Wabbits of Turin who are regularly fed by market traders. There are those in the mammal community who will support us in times of need. They are our chief allies." "But we don't know where to find them," said the young wabbit. "The Wabbit glanced at his notes and looked back up. "They will find you. Your friends, supporters and admirers must go to the Kaninchenrettung Web Site on the Internet and press computer keys," said the Wabbit knowledgeably. "Everyone gives a small amount with their credit card." "... with PayPal," shouted the young wabbit and she binkied a considerable distance. "Just the job," said the Wabbit colloquially and bowed. A tall wabbit in the centre of the compound then approached the Wabbit and said "Do you think it will work?" But something had caught the Wabbit's attention and he glanced into the sky. "I think its already starting," he replied to to the tall wabbit quietly. And he turned to the audience and raised a paw. "Seid umschlungen, Kaninchens!" And the Wabbit put up a silent prayer that the wabbits would indeed be embraced. Yet he knew in his heart that there were many out there willing to help the wabbits. "Diesen Kuß der ganzen Welt," murmured the Wabbit.
at May 06, 2011