Lovely Lapinette in the Midst of Things 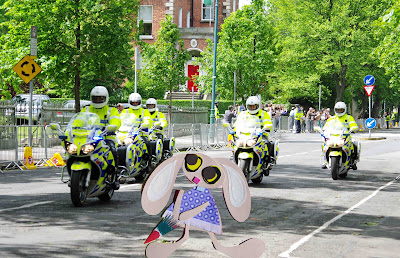 The Wabbit was all ears as Lapinette told her story. "I was going to a very important meeting of the International Wabbit Council," said Lapinette. "And it was very hot and my fur was wilting. I took a short cut through a familiar neighbourhood, but I got a piece of gravel in my paw and I couldn't get rid of it, you know?" "Most unpleasant," said the Wabbit with feeling. "Well," continued Lapinette. "It must have been obvious that I was limping a bit, because I heard an officially official person talk into a radio. He said something about immediate assistance and then there was a lot of shouting and running around." "Oooh! What then, what then," said the Wabbit. "Patience, Wabbit," said Lapinette and continued. "The longest car that I have ever seen appeared from round the corner, and it stopped just beside me." "Longer then Turbina the Jet Car," asked the Wabbit. "Longer than this very café where I am telling this story," said Lapinette. The Wabbit's jaw dropped. Lapinette frowned. Then she leaned across and, with a practiced movement, tilted the Wabbit's jaw into a more respectable position. "I will continue," said Lapinette. "The front door of the long car opened and I was invited inside." "What next? What next?" The Wabbit was on the edge of his seat and bounced up and down. "I got in. My paw was hurting," replied Lapinette. Then the Wabbit remembered something. "What about the make-up case?" "All in due course," said Lapinette.
at May 29, 2011