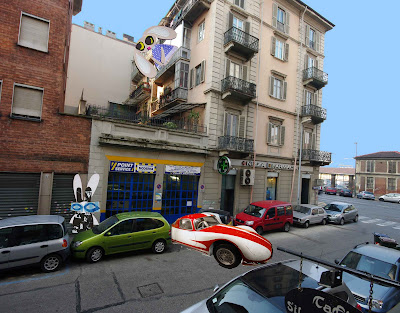 It had only been a small mattter of changing the oil and an interior switch and the Wabbit was wishing he hadn't bothered. Turbina put up the most terrible opposition to what she regarded as "tampering". The Wabbit shoved his paws deep in his fur and pretended it was nothing to to with him. It was a busy enough corner and he felt the whole neighbourhood was watching. As Turbina slammed her door on the mechanic and rattled the car ramp, the Wabbit wondered whether she would relax and allow the necessary maintenance. In his head he imagined a quiet well-mannered car. This made matters worse. Turbina's horn echoed from the walls and she belched flame from her exhaust. Then she made all her lights flash and sprayed the mechanic with water from her window washer. The Wabbit noticed Lapinette leaning from the balcony of her secret pied-à-terre and quickly turned to Turbina with a firm manner. "Visualise a long road lined with gas stations," he suggested soothingly. "And imagine they're all for you." Turbina went eerily quiet and the only sound that could be heard was the faint ticking of a fuel pump. Suddenly her door and hood flew open. The mechanic accomplished the work in record time and dived dramatically to the side. He had expected Turbina to take further revenge, but all was well. The Wabbit looked up at Lapinette with an innocent smile and waved an innocent paw. Lapinette tried to look disapproving, without success. And up on the corner, the old lady and her daughter who had seen them drive pass the park, threw their arms around each other and hugged. "Lets have an ice cream and talk about what we've seen," said the mother. And so they did.
at May 14, 2011