The Wabbit, Turbina & Jazz Through the Night 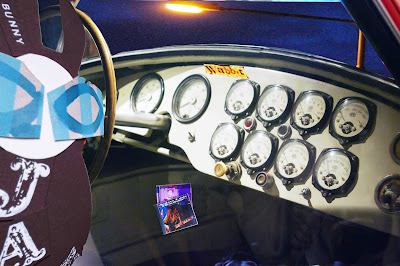 "I want to go to the Jazz ReFound Festival in Vercelli," said Turbina the Jet Car, lengthily. "Oh, we can't. We're on mission," said the Wabbit. The Wabbit didn't like putting his paw down quite so hard, so he softened. "We could always listen to jazz then," he suggested kindly. Turbina switched on the Internet radio and searched. Mellow sounds drifted from the speakers and the Wabbit settled back. Abruptly, Turbina changed the station. "I was enjoying that," said the Wabbit. "Wait," said Turbina. Suddenly they were surrounded by the soft tones of Nigel Williams at Jazz FM. The Wabbit watched and then smiled as Turbina submitted an electronic request. They had only to wait a minute for Nigel's voice. "Hey, we've heard from the Wabbit, who's just hopped on board. He's on one of his adventures in that fabulous car of his. So here's something to speed them both on their way." Turbina and the Wabbit spoke at one and the same time and all that they could say was "Ooooooh!" Turbina turned down the interior light as the strains of Ella Fitzgerald filled the car. The Wabbit sang along. "And now when you turn the lamp down low, I'm beginning to see the light." And little flickers of sodium street light fell around them like notes, as they ate up the kilometers to Potsdam and Peacock Island.
at June 01, 2011