The Wabbit hops Out on Mission 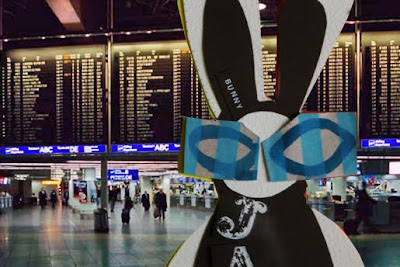 The Wabbit was feeling in a determined mood. He had read his mission papers during the flight and he was confident of success. He was to pick up Turbina, the jet car, outside the airport and drive the short distance to Rosbach vor der Höhe. It was only 25 kilometers away and the Wabbit thought he could surely have cartwheeled that distance in no time. But Turbina it had to be. It had been adapted for his paws and so had to be tested - and that was that. The Wabbit looked for the car park exit and as he hopped, he wondered what Rosbach vor der Höhe would be like. He had never been in Germany before and so he turned on the special translation unit in his ears. Then all at once he spotted a tall man holding up a very large sign and the very large sign said "Herr Kaninchen for Turbina," "Oooh that's me," said the Wabbit. "I am that very Kaninchen." "Please follow me," said the tall man, who quickly ushered the Wabbit through a side door and into his car. The Wabbit sat for a second. Then he opened the throttle and suddenly the Wabbit had gone.
at May 03, 2011