The Wabbit finds himself on Familiar Ground 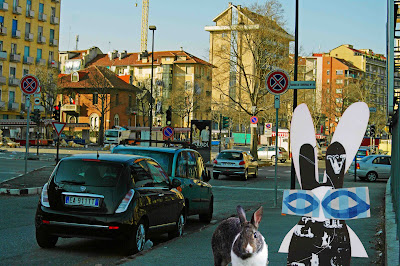 The Wabbit was so pleased with his new coat that he decided to give it an outing. So in the afternoon, he left Turbina the jet car behind and hopped over the bridge and across the railway line to another neighbourhood. "There's something awfully familiar about this place," thought the Wabbit as he looked around. The market traders were clearing up and he saw one of them take lettuce and cabbage to a nearby piece of land enclosed by a fence. The Wabbit slapped a paw to his forehead. This was the Free Wabbits of Torino Base Camp. Just as soon as he had recognised where he was, he noticed wabbits gathering on the far side of the field and making their way over. And as he was watching them, he suddenly became aware of voice from just beside him. The voice addressed him in an impossibly cheerful tone. "We were expecting you. You're just in time for a salad sandwich, Mr Wabbit." The Wabbit wondered how he could possibly be expected - since to his certain knowledge, he had given no-one any indication of his visit. Yet everywhere he went, his arrival was ready known in advance. There seemed to be nothing the Wabbit could do about it so he looked down and said, "Thank you fellow wabbit. I would appreciate a bite to eat." The small wabbit nodded his head and added, "You have mail, Mr Wabbit." "Well, lets go and find out what it's all about," said the Wabbit. And off they hopped together, over the wall and through the fence.
at May 16, 2011