The Wabbit sends off his Adversary 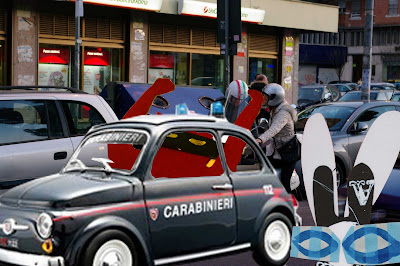 The following day, the Wabbit waited for the Carabinieri. They were transporting Skratch the Cat Burglar to a place of detention and had told him they would pass by. So the Wabbit met them on the corner as arranged. But he could barely conceal his dismay at the size of the transport vehicle. The Carabinieri assured the Wabbit that this was last available vehicle in the car pool. So he nodded his head and strode up to address Skratch. "Now look here," said the Wabbit. "I know you want something and I can assure you we haven't got it. And even if we did have it, we probably fell asleep and forgot where we put it. So we don't know what or where it is and even if we found it, we certainly wouldn't give it to you." Skratch's eyes went to pin pricks behind his mask. He couldn't cope speaking directly to the Wabbit because his brain started to whirl. So he said nothing. The Wabbit turned on his paw and advanced on the Carabinieri officer who was contemplating an ice cream. "This cat is a very dangerous character indeed. He is wanted in almost every state on various charges including fraud, extortion and grand theft auto." The Wabbit wasn't very sure about the last one, but he had seen a game in a shop window and thought it sounded good. He cast a disparaging glance as the Fiat pool car left with Skratch and the officers of the Carabinieri squeezed inside. "Sergio Marchionne shall hear of this," muttered the Wabbit.
at May 25, 2011