The Wabbit has Visitors 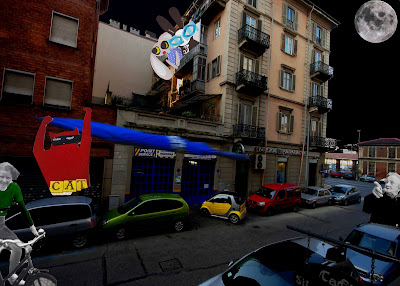 The Wabbit had just settled down for the night when he was awakened by a terrible din. He shook himself and hopped to the window, closely followed by Lapinette. The Wabbit did not take kindly to being disturbed in the night and so he grumbled at length about the world and what it was coming to. But he knew it was no good complaining and sighed as he opened the window. At first he couldn't see what was happening. "Oh look," said Lapinette. "It's that old lady. The one you keep on and on about." "And there's her daughter," said the Wabbit. "I told you, I told you and - oh no, it's Skratch the Cat Burglar!" Lapinette smiled. "Oh yes. So it is. And he has a new outfit. Look!" The Wabbit stomped his back leg irritably. "I don't care about his coat. He's a menace. He steals things and makes eyes at you." "I know," said Lapinette. "Isn't he a silly sausage?" The Wabbit knew this conversation was going nowhere and he turned to the moonlit street. "The old lady has Skratch cornered," said the Wabbit, He could hear the sirens of the Carabinieri and he knew she must have called them. He turned to Lapinette. "Oh I do hope there's going to be no unpleasantness. We're supposed to be incognito." "Oh, really! Now thank your admirers," chided Lapinette. So the Wabbit raised a paw. He scrunched it tightly and his face broke into the most enormous 28-toothed grin. "Grazie! Do call round for biscottini," boomed the Wabbit. Skratch the Cat Burglar looked at Lapinette and shrugged. The old lady tidied her hair. Her daughter's bicycle bell made a loud ding. The Carabinieri arrived. And not one person in the neighbourhood saw a single thing.
at May 21, 2011