The Wabbit has Mail 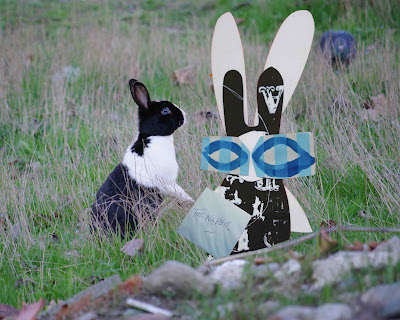 The Wabbit and Monty went way back. They had history and there been issues. But the Wabbit thought that perhaps bygones should be bygones. "Monty, what news?" The Wabbit spoke pleasantly. "There was a curious occurrence," said Monty, nervously. "Two ladies approached the camp asking for the wabbit in charge. They asked many questions about you." A faint memory stirred for the Wabbit. "One woman and one old lady bearing an umbrella?" "Exactly", said Monty. "I told them nothing of any importance of course." The Wabbit wondered how much of importance there was to tell but, all the same, he was curious. "They thrust this letter into my paws and quickly ran off. Perhaps you should open it," suggested Monty in a helpful manner - but mostly because he was curious too. The Wabbit opened the letter with a flick of his paw and took out a single sheet of lavender perfumed paper inscribed in copperplate handwriting. He scanned the contents and turned to Monty with a frown. "It warns the Wabbit and his good lady of a scoundrel who has been watching the secret pied-à-terre." "Not very secret then," said Monty. The Wabbit glared furiously at Monty and continued. "The letter suggests this cad is up to no good and implores the Wabbit to take the utmost care." The Wabbit shook his head. "It is signed Your Most Ardent Admirers," he said, in a puzzled fashion. "I could find them." said Monty. "I don't think there's any need," said the Wabbit, "since they're already following us."
at May 17, 2011