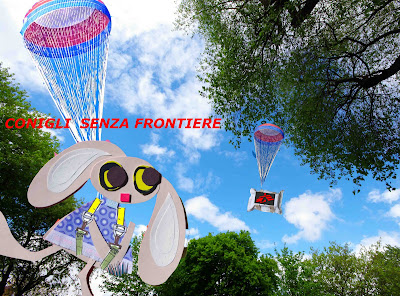 When the Wabbit looked up he saw something very familiar and he had been able to put two and two together. So when Lapinette came swooping down by parachute he could scarcely say he was surprised. Lapinette didn't take long to arrive with the first consignment of containers. She landed near the compound and as she folded up her her parachute, the wabbits of Kaninchenrettung descended on her with applause. They started to scurry around with containers, putting supplies away safely. Lapinette hopped towards the Wabbit and smiled. "I didn't know you worked for "Conigli Senza Frontiere," said the Wabbit "I don't really. I just pulled some strings," replied Lapinette. The Wabbit mused for a second. "Lapinette always manages to pull strings," thought the Wabbit. "And they stay pulled," he added to himself. "So! Ask the question, Wabbit," said Lapinette. The Wabbit was horror stricken. He couldn't think of the question. He thought and thought and thought and then he made it look as if he knew all along. "Ah yes, the question is, of course, what was that for a sort of adventure?" "It was wabbit magical realism," said Lapinette with a straight face. "It certainly was," said the Wabbit and chuckled. "What shall we do now?" "You could take me for lunch," said Lapinette. "Parachuting is very hungry work." "OK." said the Wabbit. "What about Adolf Wagner's in Frankfurt? I hear it is old fashioned and none the worse for it." "Go in Turbina the jet car?" Lapinette looked quizzical and the Wabbit put his paws on his hips. "Do you know, I'll swear that car knows what I'm thinking," "I do," said Turbina from right behind the Wabbit.
at May 07, 2011