The Wabbit presents his Credentials 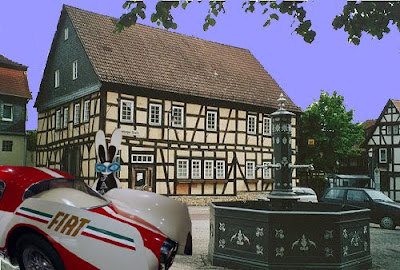 Turbina took the Wabbit straight to the Town Hall. The Wabbit didn't have to look at his map. "Oh, what a nice building," thought the Wabbit. He knew it was called the Rathaus, because his mission papers specified that he must there present his credentials. The Wabbit had been met by the Mayor. "We are expecting you," the Mayor had spoken in a pleasant voice. The Wabbit had then presented his diplomatic pass, which was inspected with approval. Then he was given a wonderful packed lunch, presented in a tray with compartments. In each compartment there was a portion of his favourite food - sliced carrots, artichoke tubers and gourmet pellets. "Ich bin Ihnen sehr dankbar," the Wabbit had responded, because his tummy was rumbling and he was very grateful indeed. Everyone in the building came out and stood on the stairs and waved. "Viel Glück, Herr Kaninchen!" The Wabbit had been quite overcome. Now, as he sat in Turbina, he wondered quite where he was supposed to go and he realised he had forgotten to ask. The Wabbit slapped his paw across his forehead and said to Turbina "I suppose you know." "I do." said Turbina.
at May 04, 2011