The Wabbit at Hallowe'en 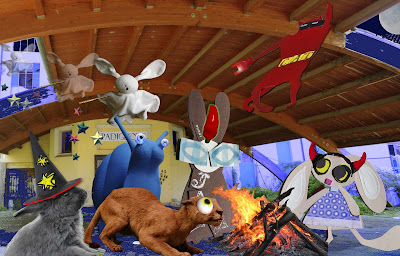 Ghost Bunny swooped into the Hallowe'en gathering. "Are you frightened Fellow Ghouls?" she yelled. "Yes," shouted the gathering in a dutiful response. "How frightened?" she shouted. "Petrified!" they all hollered back. "It's time for the first story," said Ghost Bunny. Snail cleared his throat and nudged the Wabbit. "Did you hear the story about the old empty hospital," he asked. "There was nothing in it," smiled the Wabbit. Everyone groaned and chuckled at the same time. "Who stops ghosts smuggling?" asked Franco. "I give up," said the Wabbit quickly. "The Ghostguard," said Franco. "I liked that one," said Puma. "Where do baby ghosts go during the day?" asked Ghost Bunny. Everyone shook their heads. "A dayscare centre," she said. Everyone giggled for a while. "Did you ever hear tell of the Bunny Man?"asked Skratch the Cat in a low serious voice. "No," said the gathering. "He dressed as a big big wabbit and came out in the dead of night to drag victims to his tunnel." "Oooh," said Ghost Bunny. "What happened?" "He's thought to be deceased," said Skratch. "But every Hallowe'en he appears with his axe. If you listen, you can hear him." They all listened carefully and sure enough they could hear a dull thudding. They all drew closer to the fire and shivered. The Wabbit looked around and around to see if things were safe, but still they could all hear an increasing beat as the Bunny Man advanced." Skratch," said Lapinette." Yes," said Skratch innocently. "Stop thumping your tail," she grinned.