The Wabbit hosts the Podium 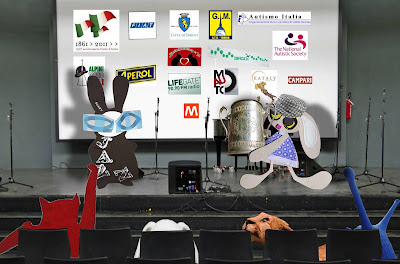 If there was one thing the Wabbit could do well, it was an urgent whisper. "Lapinette!" the Wabbit whispered urgently. "What do I say?" he hissed even more urgently than before. Lapinette whispered back reluctantly. "Just make it up as you go along, you usually do." "OK," said the Wabbit. He plumped up his fur and adopted an engaging manner. "I am pleased to award the winner with this magnificent and extremely large trophy." The Wabbit waited for the applause to die away. "As runner up I have the greatest pleasure in announcing that Aperol and Campari have agreed to sponsor our carrot aperitivi." "Wabbit," whispered Lapinette. "You're a disgrace." But she held the massive cup over her face to hide a smile. "Now he won't have to pay," said Skratch to Ghost Bunny. "Shhhh!" said Ghost Bunny. The Wabbit staggered forward and passed the cup to Lapinette with some relief. Everyone watched Lapinette hold the Cup up high. "Hurrah!" cried Ghost Bunny and wailed very softly. "All of these organisations have helped us along our way," said the Wabbit. "Mostly unwittingly," said Lapinette quietly. Lapinette caught the attention of the audience with a serious voice. "It is always our custom to have a favourite cause and we are introducing the Autistic Society and Autismo Italia. "Members of the Carrot Club will be collecting your emergency coins," said the Wabbit. "Dig deeply in your fur." "I have no fur,” said Snail. "You're not getting out of it," said the Wabbit.