The Wabbit and the Gala Dinner 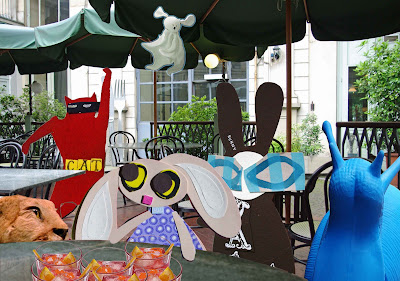 Everyone was arriving for the winner's Gala Dinner and they were in good spirits. Ghost Bunny fluttered to the music and Puma prowled and growled. "Ho there my homies!" The loud greeting heralded Skratch, strolling in as if he was walking onto a yacht. "The carrot aperitivi are quite delicious," said Lapinette, who had already tried one. "Here's to the winner of the race," said the Wabbit. "Next year will be a different matter." "Oh, shall I give you driving lessons?" asked Lapinette." Ghost Bunny tittered and watched the Wabbit. "That won't be necessary," said the Wabbit, waving his paws. "I'm working on something." "In the shed at the back of the Department?" asked Lapinette. "It's very hush-hush," said the Wabbit and he winked at Ghost Bunny. "Whatever you're cooking, it better be good," said Lapinette, stroking Puma's head without thinking. "Purr," said Puma. "What's on the menu?" asked Snail. "Carrots!" exclaimed Lapinette. "I have some fungi and cardboard for you, Snail." "Yum," said Snail. "And I ordered herring for Skratch and Puma. Ghost Bunny is having scary carrots." "Scarrots!" cried Ghost Bunny. "What about me?" asked the Wabbit. "Artichoke tubers for us," said Lapinette. "There are only two kinds of food," stated the Wabbit, solemnly. "Do tell," murmured Lapinette. "There are artichokes ... and then the rest," smiled the Wabbit. "Don't wolf them down!" shouted everyone.