The Wabbit makes his own Luck 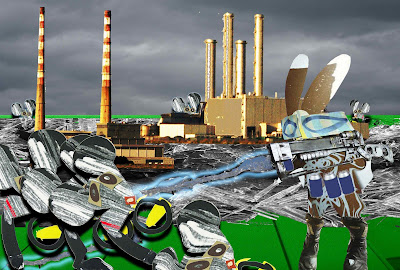 The Wabbit climbed up and through the surface hatch, loped several paces and then wheeled quickly around. Even with his special insulation, he could feel the cold air bite through his fur. He dusted his paws for good luck and reached for a blue canister from his waist belt. The canister made a soft snick as it locked into place and his emergency weapon emitted a high pitched whine that hung threateningly in the icy air. Suddenly, the ice mice tumbled through the hatch and rushed straight at the Wabbit in overwhelming number. The Wabbit ignored their menacing cries and fired his first round, unleashing a stream of viscous blue slime which fell all around the ice mice. They cried out with penetrating squeaks as their feet stuck to the slime and the slime stuck to anything there was to stick to. Even though the mice tried with all their might, they couldn't break free. "Thank you, Blue Snail," murmured the Wabbit mysteriously. "Turn it off, turn it off," shouted the mice as they tried to free their limbs, but the slime stuck them to any surface like glue. "It doesn't turn off," shouted the Wabbit, "It was a design option!" He ejected a blue canister and was about to load another when he looked down briefly. A stray ice mouse was grabbing for his ammunition, but it was a sitting duck. The Wabbit gave it a push that sent it tumbling into the widening blue pool. Then he hunched down and thought long and hard as he watched the captive mice. He clapped his paws together for warmth and tried to figure it out. "It only took a minute," thought the Wabbit. "That was too easy."