The Wabbit and Lapinette Square Up 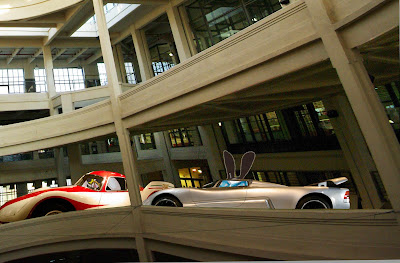 Both Lapinette and the Wabbit took off like bullets from a gun and it was the Wabbit who squeezed recklessly through on the outside of the first corner to overtake Lapinette. But his joy was short-lived as Lapinette easily passed him on the straight. "More power, Wob," gasped the Wabbit, "more power!" "I'm operating outside permitted parameters," said Wob, calmly. "I'll operate on your parameters in a minute," shouted the Wabbit and he stamped his foot down. He powered alongside Turbina and took the chance of glancing across at Lapinette. The Wabbit was just about to make a face when Wob interrupted. "The rules say no rude gestures," he stated in a matter-of-fact voice that infuriated the Wabbit. The Wabbit only had time to shout "Go Wob go!" before Lapinette squirreled through on the inside of the corner and drifted across his bows into the lead. But she just as quickly lost it at the next bend as Wob slid though on two wheels. "You surprise me Wob," murmured the Wabbit. "I've remapped, said Wob.”She's very close," shouted the Wabbit. "Remap more!" Suddenly Lapinette drew alongside and smiled across at the Wabbit. The Wabbit smiled back sweetly and blew a kiss but Lapinette shot ahead again. "Wob!" he hissed urgently. "We're in her slipstream. Stay here and just before the bottom, we'll do something astonishing. "What?” asked Wob, "I'll think of something," said the Wabbit.