The Wabbit has a Surprise Reunion 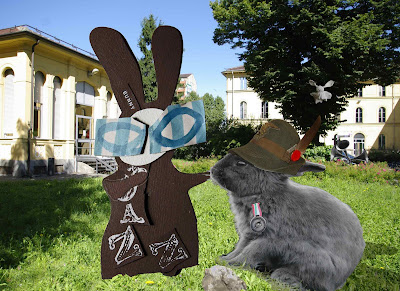 Turbina dropped the Wabbit at the old abandoned hospital and he hopped around, looking for his friends. Suddenly, he stopped in his tracks. "Sir?" said a familiar voice. An enormous smile spread across the Wabbit's face and he wheeled about. "Franco Contadino! I thought I'd never see you again!" shouted the Wabbit with glee and he threw out his paws and hugged Franco and hopped up and down. "I was very sick, Sir," said Franco. "In the camp evacuation." "Tell me," said the Wabbit gently. "I dreamt I was in a green place with flowers and statues, Sir," said Franco. The Wabbit's fur tingled. "Then I heard a booming voice say that my orders were thrice changed and I must return, Sir." "Thoth," thought the Wabbit. "The Goddess Unut did change things." "This is is our new camp now, Sir," said Franco. "Relocation and reconstruction being led by a new attaché." "Oh yes?" said the Wabbit. "Fine officer, Sir. Name of Ghost Bunny," said Franco, "Lectures on a new tactic," he added. "We must welcome the new," murmured the Wabbit, fresh from his journey. Then he paused. "What kind of tactic?" he enquired gently. “The Bunny Zap, Sir," said Franco. The Wabbit's fur stood on end. "All personnel to Padiglioni 3 on the triple," he yelled and to his amazement his voice boomed across the grounds from loudspeakers. "This is not a drill," he added and his voice trailed off and he couldn't think of anything else to say. The Wabbit looked at Franco and shrugged. "Orders Sir!" said Franco. "Be there or be square," yelled the Wabbit and groaned.