The Wabbit and the Problem of the Past 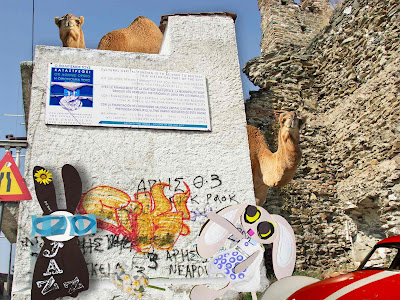 "Has there been some kind of trouble here?" asked the Wabbit. "It's about the past," said Lapnet the demi-Goddess and she paused and tilted for Goddess effect. "In bygone times, desert came up to these walls and camels brought all manner of goods from distant and exotic lands." "Camels?" asked the Wabbit. Lapnet waved a paw and two camels appeared and spoke. "We are," said the first camel. "The Casbah Camels," said the second. The Wabbit gaped. "Shake the Casbah?" he asked without thinking. "Rock the Casbah," corrected Lapnet. The two camels looked and each other and winked. "Nuzz nuzz!" said the first Camel in a jolly fashion. "We came 'ere by train," said the second camel and the first one laughed and laughed. "How do you two feel about change?" ventured the Wabbit. "Shake 'em up," said the first camel. The other one threw its head back and bellowed and howled. "Rattle and roll," they said together. The Wabbit could see they were both chewing and he drew close to Lapnet. "I like the look of of camels, but they spit," he whispered. "Wabbits don't spit," said Lapnet. "Not even if we wanted to," said the Wabbit ruefully. He quickly ushered Lapnet inside Turbina the Jet Car, wound up the windows and settled back. "Would you care for a liquid beverage?" he asked of Lapnet. "What do you have?" replied Lapnet. The Wabbit perused Turbina's tiny cocktail cabinet. "I can offer you Ambrosia, nectar, or would you prefer mead?" "I would rather have a carrot aperitivo," said Lapnet.