The Wabbit's Path is Blocked 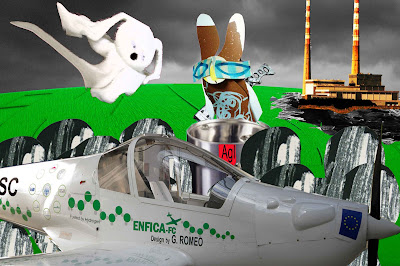 The Wabbit had used all his slime ammunition mopping up the ice mice, so he casually slung his weapon over his shoulder and looked towards his plane and home. But the plane was surrounded by even more ice mice. The swarm of mice had blocked his path and he could see there was no direct way through. The Wabbit’s mind raced. "Should have gone to Machu Picchu," thought the Wabbit recalling his expert advisor. Then to his horror the Wabbit spotted a familiar cylinder and his heart sank. "The devils have my Silver Iodide," he groaned and his pulse quickened and he looked all round for another route. It was then that he heard it, a long moaning cry way up in the air. And the Wabbit's ears swung and pointed and stiffened and he swore to himself that he had never heard such a sweet sound. Ghost Bunny wailed as she came out of the sky like a missile and she dipped and dived sharply and moaned again. She hurtled towards the ice mice with a terrifying sound that chilled even the Wabbit's blood. As the Wabbit watched, he saw the mice gradually freeze rigid one after the other until they were like statues. The Wabbit smiled with all of his 28 teeth. "Any more party tricks?" asked the Wabbit. "I haven't even started," said Ghost Bunny and she fluttered down and smiled the most innocent smile a ghost wabbit could muster. "What shall we do now?" she murmured. "Dump the silver iodide and give these Alpini a break," said the Wabbit.