The Wabbit reviews the Mission 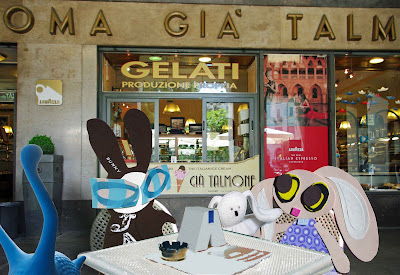 "Well, that was an exciting and productive mission," said the Wabbit. "The Alpini think so now they have their snow," said Lapinette. "Splendid," said the Wabbit and Snail at exactly the same time. Lapinette looked straight at the Wabbit. "An invitation has arrived from the Alpini for the hero," she said. "Oh good," said the Wabbit and he clapped his paws, thinking of a gala dinner. "It's not for you, it’s for Ghost Bunny,” said Lapinette. "Oooooh, frighten!" said Ghost Bunny, quietly. "The Alpini want you to race down the piste with them and drink flaming aperitivi," said Lapinette smiling. “At night, “ she added and her eyes gleamed. "Who, me?" asked Ghost Bunny. "Oh you do deserve it," said the Wabbit. "But you'll have to practice the Alpini wail. It goes "Oi la la luuuuuuuuuuu!"" "I think I'll just practice that now," said Ghost Bunny and yelled an enormous Alpine cry that echoed down the porticoes as far as Porta Susa Station. As the cry died away, Big Blue Snail untangled his antennae and cleared his throat. "I fear it is time to ask what kind of adventure that was," he stated categorically. "It's Space Fantasy," said Ghost Bunny. "Eco-Disaster," said Big Blue Snail. The Wabbit looked from one to the other. "In this case we must stay away from clichés," he murmured. "What do you suggest?" laughed Lapinette. "It was soap," said the Wabbit.